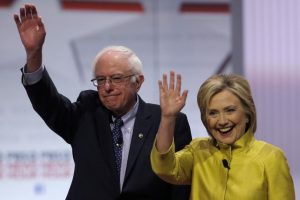 Hillary Clinton and her biggest challenger Bernie Sanders will end the Democratic primary calendar on Tuesday with a meeting that could set the tone for party unity as well as for the party’s convention next month in Philadelphia.

Sanders and Clinton will meet in Washington, D.C. the site of the final primary for the presidential nomination, a contest that has no bearing on the role of Clinton as the Democratic presumptive nominee however, it starts the transition from the long primary battle between two rivals.

The senator from Vermont vowed to do everything he can to stop Donald Trump from becoming the president, but suggested he would not immediately endorse Clinton.

Sanders said that his private meeting scheduled with Clinton for Tuesday would help him make a determination of how committed he would be to Clinton and the policy issues he staked out in his campaign of 13 months.

He said during an interview that he wanted a sense of what type of platform she would support, if she would be vigorous in standing with working families as well as those in the middle class, aggressively battling climate change, healthcare for everyone and making public universities and colleges tuition free.

Following his talk with Clinton, Sanders indicated he would then have the ability to make other decisions.

Obama signaled to the rest of the Democrats that he hopes to have a constructive role in campaigning to help their party retake control of the U.S. Senate in this November’s election.

The self-titled democratic socialist said he would take his campaign to July’s convention and advocate for policy issues of his being part of the platform while urging other Democrats to be inclusive of youth, working class and independent voters, of which all were highly pivotal in him winning in 22 states.

However, what that ends up looking like remains unclear. Sanders had asked for advice from his supporters on how his campaign should be taken forward.

On Tuesday, Sanders will meet with Democrats from the Senate during their luncheon held weekly following up on last week’s meetings with Harry Reid the Senate leader for the Democrats and Chuck Schumer a Democratic senator from New York who is the incoming party Senate leader.

Clinton is scheduled to have a rally on Tuesday in Pittsburgh followed by a private fundraiser in Washington prior to meeting with Sanders.