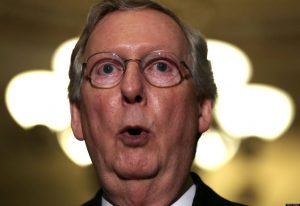 Republican Senator Mitch McConnell the Senate Majority Leader would not answers questions on Sunday about whether the presumptive Republican presidential nominee Donald Trump was qualified to be president. McConnell said he would leave that decision to the American people.

The Republican from Kentucky was pressed during a television news show on Sunday about the poor poll numbers of Trump and concerns that a number of controversies, which included attacking the ethnicity of a judge and the firing of his campaign manager, left a growing number of American voters believing the Republican is not qualified for the presidency.

McConnell said he has no doubt Trump has made mistakes the past couple of weeks. He added that he thinks Trump’s campaign is correcting the mistakes made and there is still a great deal of time prior to the November elections. The burden said McConnell is on Trump and his people to convince voters he is qualified for the job.

He praised the GOP nominee for firing Corey Lewandowski his campaign manager and for using the teleprompter more to give his prepared talks instead of making remarks off the cuff.

When pressed by an interviewer about whether Trump was qualified for the White House, the leader of the Republicans in the senate would not give a direct answer.

He said he wanted the American people to decide that. He added that Trump won the nomination of the GOP fair and square, adding that he received more votes than a group of well qualified politicians.

Amongst the biggest challenges of Trump is his huge fundraising deficit. His cash on hand is just $1.3 million as of the end of the last period for reporting which is less than most candidates for Senate let alone a nominee for the presidency.

Asked whether Trump could win without raising more money, McConnell answered, “No, however I hope he will not have that type of money deficit when fall arrives.”

There is much work needed said McConnell in order to turn the campaign around, He added that one flaw currently hurting the campaign was the lack of funds and that Trump must catch up quickly.

He did not say that Trump should use his own funds, but did say Trump needed a great deal more money to compete versus Clinton.

McConnell said where the money actually comes from is not that important, but he will need far more than what he already has.