Donald Trump and Hillary Clinton Even At Time of First Debate 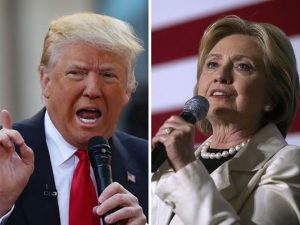 On Monday, Donald Trump and Hillary Clinton will face off for their first presidential debate in a virtual deadlock in the 2016 race for the White House, showed a new poll by ABC News and the Washington Post.

Clinton’s advantage of August has all been wiped out due to recent problems while the Republican nominee is still facing doubt over his temperament and qualifications.

Likely voters at this time are split 46% for Hillary and 44% for Trump. Gary Johnson the nominee from the Libertarian Party is sitting at 5% and Jill Stein from the Green Party is at 1%.

Amongst registered voters, both Trump and Clinton are sitting on 41%, with Johnson at 7% and Stein 2%.

In a matchup that is just two-way, between the nominees from the major parties Clinton beats Trump 49% to 47% amongst the likely voters while the two are deadlocked at 46% amongst registered voters.

The two-point advantage of Clinton’s amongst the likely voters for both the two-way and four-way ballot polls is within the sampling error of 4.5%.

These findings underscore the amount the race of the White House has become so much tighter over the past few weeks, after the two conventions showed Clinton with a sizeable lead amongst the likely voters. In the beginning of August, Clinton led Trump by as much as 8% on some polls.

As Hillary has encountered some problems, Trump has been able to present himself as being disciplined in his effort to grab more support of the vote especially from those voters who traditionally support the GOP nominees.

Some other polls across the nation show that Clinton holds a larger lead, but the average of most polls show the race’s margin is in the low single digits at this time.

With the race so tight, the debates will have a significant impact on the outcome, as there is less than a month and a half left before the election.

Eight out of every 10 voters said they will be watching the debate on Monday and 44% expect that Clinton will come out on top with 34% expecting Trump to be the winner.

Seventeen percent of the voters who are registered say these debates could change their minds while only 6% say there is a good change of that taking place.

Most Americans are saying they are following this campaign diligently but it appears more Trump backers are paying more attention than those for Clinton.