Transition Effort to Be Led by VP-Elect Mike Pence 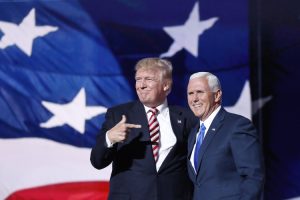 The transition effort for entering the White House will be taken over by Vice President-elect Mike Pence, who replaced New Jersey governor Chris Christie as Donald Trump moves rapidly to assemble his new government team following his stunning upset win in the election.

This reorganization puts the task of choosing cabinet members and key posts in the West Wing in Pence’s hands. Pence’s loyalty to Trump and his deep contacts with Republicans already on Capitol Hill have been seen as being critical for navigating the often politically treacherous period of transition.

However, in shuffling those who are responsible for the shaping of his new administration, Trump is keeping a tight inner circle from his campaign advisors who have become very skeptical of Washington and helped design the campaign of outsiders built on often angry and divisive rhetoric.

One top adviser during the transition will be Breitbart News chairman and conservative provocateur Stephen Bannon.

Three of the adult children of Trump and a son-in-law, who were amongst his closest advisers during the campaign, will be part of an advisory committee of 16 members that will help guide the choices he makes.

Christie will be the vice chairman of this transition effort the campaign announced. The new Trump inner circle at his transition office will help to direct the activities of a number of lobbyists, corporate consultants and other individual specialists who are to be responsible for recommending different candidates for different agency jobs throughout the breadth of the U.S. federal government.

Some advisers will be from industries for which they now are in charge of locating top regulators.

The move to sideline Christie, who was in charges of this transition for a number of months, came as a big surprise.

After Christie dropped out of the primary race for Republicans, he became a big Trump supporter. However, his standing with Trump has fallen of late as two former aides were given convictions for a scandal that involved shutting access to certain lanes in 2013 of the George Washington Bridge.

In a prepared statement, Christie said he was proud to have had his pre-election time as the leader and is looking forward to working with VP-elect Mike Pence.

People familiar with this reorganization discussion announced that Trump son-in-law Jared Kushner wanted to marginalize Christie, who recognized that he no longer was in the running to be the top gun in this transition team.