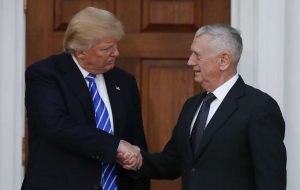 On Thursday, U.S. President-elect Donald Trump announced that he chose retired Marine General James Mattis to be his Secretary of Defense. Mattis has said that responding to today’s political Islam is the biggest issue of security facing the U.S. today.

Trump, during a rally in Ohio, said he was appointing Mad Dog Mattis to be his defense secretary.

Trump joked that the audience and media should keep it to themselves since they were not going to make an official announcement until next week.

Mattis retired in 2013 as the chief of U.S. Central Command and has often been heard saying that Washington is lacking overall strategy for the Middle East, opting to handle the different complex issues in a manner that is ineffective.

For Mattis to take his position, Congress needs to pass new legislation that bypasses a law that states defense secretaries must have been on active duty sometime during the previous seven years.

A similar exemption was granted by Congress only one time back in 1950 when General George Marshall took the job.

Earlier on Thursday, a spokesperson for the transition team, tweeted that there still was no decision made, but Donald Trump Jr. retweeted a report that the appointment was given to Mattis.

Mattis, who is 66, served over 4 decades for the Marine Corps and is considered one of his generation’s most influential leaders in the military and very strategic, which at times has drawn rebukes for aggressive talk.

Since his retirement, he has been a consultant and a fellow with Hoover Institution, a Stanford University think tank.

As does Trump, Mattis is in favor of tougher stances against adversaries of the U.S. abroad, especially the Islamic Republic of Iran.

The retired general, this past April, said that while discussions of security often are focused on Islamic State and other terrorist groups, the regime in Iran holds the biggest enduring threat to peace and stability in the Middle East.

The general also has said that the next U.S. president would inherit a big mess and has argued that the deal signed with Iran by the Obama White House in 2015 might slow the ambitions of Iran to have a nuclear weapon, but does not stop them.

However, he did add that absent a clear violation he saw no way that Washington would be able to get out of the deal due to any sanctions that are unilateral issued by the U.S. would not be equally valuable if allies did not come aboard.