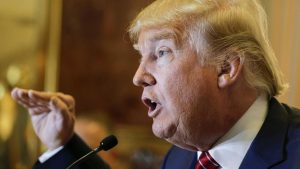 On Sunday, president-elect Donald Trump pledged to lower corporate taxes for all, but also said he would be charging 35% tax for any company that leaves the U.S. to operate in another country, lays off employees or builds new plants or factories in another country and returns its products back to the U.S.

Trump said that those businesses deserve a retribution and that businesses that want jobs offshore are now forewarned.

This is a promise that Trump had said before. However, after scoring big with his negotiations with Carrier, the ongoing debate of how and if politicians should stop companies in the U.S. from shifting their operations outside the U.S. is now in high gear.

Many investors and economists are optimistic about the plan of Trump to focus on the potential for large tax cuts and to roll back business regulations.

Businesses for years have urged Washington to cut corporate taxes from the current 35% rate. Trump wants that rate to be lowered to 15%. He also has pledged to cut the regulations on a number of industries including coal power and Wall Street.

However, some economists expressed concern about Trump’s protectionist policies on trade, which could hurt growth in the economy.

Many opponents of Trump’s 35% tax are conservatives, who argue Trump is selecting winners and losers.

One national paper wrote negatively about the offshore policies of Trump arguing that politicians should not interfere with business decisions that try to maximize profits, as sometimes laying off workers in the U.S. is outweighed by benefits of raising profits, paying more taxes and hiring additional American in other areas of the business that are growing.

In addition, the tax of 35% would increase prices for the American consumer. Even if the Trump administration imposes the promised tax tariff on the foreign goods, the tax of 35% could make those items even more attractive.

Others say that Trump is only incentivizing companies to play a game of offshore chicken.

To remain in the U.S., Carrier was given $7 million worth of tax breaks. Other companies that look for deals that are similar might first threaten to take their jobs overseas as well.

It is also not clear how this type of tax would be carried out. United Technologies the parent company of Carrier went ahead with the plan it had of shifting 1,300 jobs into Mexico even after striking its deal to keep over 800 jobs in Indiana.