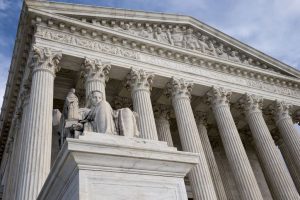 Donald Trump will inherit over 100 court vacancies which is uncommon in the federal court system, as well as the open seat in the U.S. Supreme Court, which gives the soon to be U.S. President a huge opportunity to reshape the country’s judiciary once he takes office.

The estimated judicial vacancies have reached 103 that most expect President Obama to hand to Trump when there is a transition of power on January 20. That is close to double the openings that Obama was handed over that were 54 when George Bush left the presidency.

Confirmation of the judicial nominees for Obama slowed almost to a halt, after the U.S. Senate was controlled by the Republicans, in 2015.

Officials at the White House blamed Republicans in the Senate for what they called an unprecedented amount of obstruction in blocking the court picks by the Democratic president.

The result has been an increased number of openings across the entire list of district and federal circuit courts that will give the new president, who is a Republican, the chance to make a number of appointments that are for a lifetime.

Abortion restrictions, gun control measures, voter laws, immigrant issues and anti-discrimination measures are different matters that have been increasingly heard by the federal judges and will become influenced by the composition of the U.S. courts.

During his campaign Trump vowed to pick ideologues that are from the same mold as Antonin Scalia the late justice on the Supreme Court who was a conservative icon.

Many believe Trump will start his selections for court appointments, including for the Supreme Court, shortly after being inaugurated.

The vacancy in the Supreme Court that was created by the death of Scalia last February was a big issue for a number of conservative voters to vote for Trump, especially for the evangelical Christians.

Republicans in the Senate have refused to hold a hearing on the nomination by President Obama of Merrick Garland for the vacant seat left by Scalia’s death.

Democrats have accused Mitch McConnell the Senate Majority leader and Senator Charles Grassley the Judiciary Committee chair, both Republicans, of intentionally denying the nominees by Obama a fair and impartial hearing running the clock out in hopes that a GOP president would follow, which is exactly what happened when Trump was elected in November.

Twenty-five of the court nominees by Obama were pending on the floor of the Senate, after being given approval from the committee in bipartisan support.