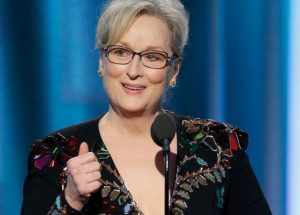 Meryl Streep, who was given the Cecil B. deMille Award during the Golden Globes on Sunday night, used her acceptance speech to deliver harsh comments to Donald Trump and to advocate for freedom of the press.

Recalling a moment when Trump mocked a reporter who is disabled during his campaign rally, Streep labeled it a performance that stunned her. She added that nothing about it was good, but it was effective and succeeded in doing its job by making the audience in attendance laugh.

It was the moment when the person who was asking to be elected to the most respected seat in the nation imitated a disabled reporter, who was someone he outranked in power, privilege and the ability to fight back, said Streep.

She added that it broke her heart when she saw it because it was real life and not a movie.

Streep said the instinct to humiliate, modeled by someone in the public eye, by a powerful person, filters down to everyone, because it give a type of permission for others to do the same.

Trump, through an interview he apparently gave to the New York Times early Monday, said he did not see the comments made by Streep, but that he was not surprised to receive criticism by what he called liberal movie people.

Trump also denied, which he has frequently done, that his intentions were to mock the reporter for being disabled the incident that Streep was referring to in her comments.

Streep also urged members of the audience to get behind the Committee to Protect Journalists to support and preserve independent press and outlined specifically the variety and birthplaces of the many nominees and winners of the Golden Globes.

Streep said that Hollywood was full of foreigners and outsiders and if they are kicked out there would be nothing more than sports and mixed martial arts to watch and they are not the arts.

Host of the Golden Globes, Jimmy Fallon, also took advantage of his time on stage to comment about the president-elect, by saying the awards show was one of the few places remaining in the U.S. were the popular vote was still honored.

Hugh Laurie, the winner of the best supporting actor award for The Night Manager, joked that the ceremony would be the last for the Golden Globes because the awards were chosen by an association that has the words foreign, press and Hollywood, which are groups that Trump has often criticized.