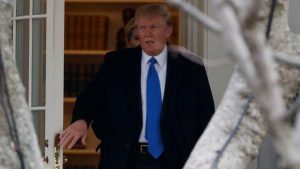 This week is very important in Washington for President Donald Trump as he attempts to focus on infrastructure prior to the Thursday scheduled testimony of James Comey the former director of the FBI.

Congress returns from its Memorial Day break with important votes to make including legislation that would scale back regulations imposed by the Dodd-Frank act.

However, Trump has started early on Twitter already arguing the Department of Justice should request an expedited hearing of the travel ban he called watered down, before the U.S. Supreme Court.

Only four days from pulling out of the Paris agreement for climate control, Trump’s chief of the EPA Scott Pruitt does not have any answers to whether Trump believes that human activity is a contributor to today’s climate change.

The terror attacks over the weekend in London prompted not only calls for global support and solidarity, but drew Twitter activity from President Trump. He actually verbally attacked the London mayor due to a misinterpreted tweet by the mayor who said there was not any reason for Londoners to be alarmed at more police presence in the city.

A spokesperson for the mayor said called the tweet by Trump ill-informed, saying the words of the mayor had been taken out of context.

The upcoming hearing with Comey is likely to obscure the shift to infrastructure by Trump. However, there is more action taking place on Capitol Hill this week with the Dodd-Frank Act scale back vote and a vote by the House on Wednesday on a measure that would waive the requirement of a polygraph to expedite the hiring of new Border Protection agents.

President Trump will not likely try to block the testimony of Comey, said aides. He does not plan to invoke an executive privilege as a way to attempt to block Comey from testifying, said sources close to the Trump administration.

This week could end up being a difficult one for the Trump White House as the Comey testimony looms and could create even more problems for the President related to Russia’s involvement in the presidential election last November.

Congress also returns with the healthcare measure still on its plate which could also cause more frustration for Trump and his administration as that legislation is still far from being approved.

Trump’s obvious frustration with his travel ban order will also feature into things this week as he is pressuring the Supreme Court to hear the ban as soon as possible for the country’s national security.