Bank of America upgraded shares of Energen (NYSE:EGN) from a neutral rating to a buy rating in a research note published on Thursday morning, Marketbeat Ratings reports.

Energen (NYSE:EGN) last issued its quarterly earnings data on Tuesday, May 8th. The oil and gas producer reported $0.81 earnings per share for the quarter, beating the Thomson Reuters’ consensus estimate of $0.77 by $0.04. Energen had a net margin of 34.60% and a return on equity of 4.95%. The company had revenue of $356.17 million for the quarter, compared to analyst estimates of $335.96 million. During the same period in the prior year, the firm earned ($0.13) earnings per share. The company’s revenue was up 47.8% on a year-over-year basis. equities research analysts anticipate that Energen will post 3.55 EPS for the current fiscal year.

In other news, Chairman J T. Mcmanus sold 3,116 shares of the firm’s stock in a transaction that occurred on Monday, March 26th. The shares were sold at an average price of $58.06, for a total value of $180,914.96. Following the sale, the chairman now directly owns 115,794 shares in the company, valued at approximately $6,722,999.64. The transaction was disclosed in a filing with the SEC, which is available at the SEC website. Also, Director Jonathan Z. Cohen purchased 17,500 shares of Energen stock in a transaction dated Friday, March 9th. The stock was bought at an average price of $57.36 per share, for a total transaction of $1,003,800.00. Following the completion of the purchase, the director now owns 17,500 shares in the company, valued at approximately $1,003,800. The disclosure for this purchase can be found here. 1.05% of the stock is owned by company insiders.

Energen Corporation, through its subsidiary, Energen Resources Corporation, engages in the exploration, development, and production of oil, natural gas liquids, and natural gas. The company has operations within the Midland Basin, the Delaware Basin, and the Central Basin Platform areas of the Permian Basin in west Texas and New Mexico. 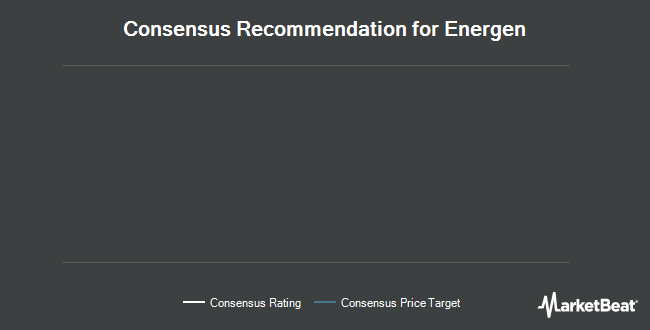 Complete the form below to receive the latest headlines and analysts' recommendations for Energen with our free daily email newsletter: