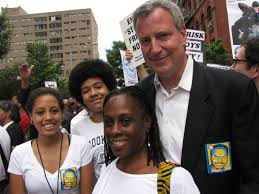 The inauguration ceremony on Wednesday for New York City Mayor Bill de Blasio turned into a celebration in bashing outgoing Mayor Michael Bloomberg, who to his credit, sat stone-faced through it all on stage in the front row while speaker after speaker spoke negatively of his legacy.

City Hall gave Bloomberg a hero’s send off on Tuesday, when his staffers and others offered him thanks. However, Bloomberg was hit hard by reality on Wednesday when politics took center stage and he had a bull’s eye squaring on his back.

Just moments into the ceremony, the rude awakening began for Bloomberg when Harry Belafonte the singer and activist promised that the new mayor would not let the city remain so divided.

A chaplain with the Sanitation Department compared New York City to a plantation. Even Ramya Ramana, the Youth Poet Laureate who is just 18 years old, described the city as being plagued by “classism,” with the brown-stoned in a tug of war with the brown-skinned.

However, the harshest words came from Letitia James the new public advocate for the city whose fiery speech blasted Bloomberg’s entire era as Mayor of the city.

James said the increasing gap between those who have and the have-nots was undermining the city and was tearing at our democracy.

She called Bloomberg’s time in office an age of inequality where decrepit housing is in the shadows of condos worth millions of dollars and the abuses of stop and frisk have been touted as being success stories, as if the only way to reduce crime is by infringing on the civil liberties of those of color.

Every speaker who attacked Bloomberg’s legacy did so without mentioning him by name, but his or her intentions and target was very clear.

One of Bloomberg’s former opponents for mayor, Mark Green said that he watched Bloomberg during the entire inauguration activity and said he deserved points for having discipline.

It took over an hour into the ceremony before someone actually said something positive about Bloomberg. Those remarks came from Bill Clinton the former President.

Clinton said he wanted to thank Bloomberg, who committed most of his life to New York City. He leaves the city healthier and stronger than when he took offices and more people are coming to work and live than are leaving. Bloomberg mouthed thank you to Clinton.