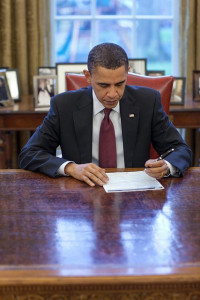 President Barack Obama has dismissed a proposed lawsuit by John Boehner the Speaker of the House targeting the delay of the healthcare law employer mandate as just a political stunt.

Obama called the lawsuit a political stunt that would only waste months of time for Americans and taxpayer’s dollars.

Obama blasted Republicans from the House for blocking each and every idea to make the middle class stronger this year. The President argued that House Republicans forced his hand when it came to using his executive powers.

The plan by the Republicans, added the President, is not helped with that kind of work, but to sue him.

He called upon House Republicans to help the working Americans, join him and the rest of the U.S. rather than pursuing a lawsuit.

A Boehner spokesperson dismissed criticism that was similar from Josh Earnest the press secretary at the White House.

The spokesperson said that Earnest criticized the lawsuit by the House while drawing a salary that was taxpayer funded and standing behind a podium that was also funded by taxpayers.

According to legislation that was being drafted on Thursday, the lawsuit by the Speaker would challenge the decision by the administration to delay unilaterally a requirement that companies offer health insurance coverage to employees or pay penalties.

Under that law, employers with over 50 workers who are full time must offer them health coverage or pay a fine.

However, earlier in the year, health officials from the federal government announced that firms with 50 to 99 workers would have until the start of 2015 to comply with offering health coverage to employees or pay a fine.

That came after another delay from July of 2013, which pushed the implementation back of the penalty for the companies impacted until January of 2015.

$101.70 Million in Sales Expected for Magnachip Semiconductor Co. This Quarter