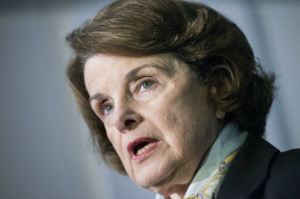 Leaders of the Senate and House intelligence committees pushed President Obama on Sunday to take decisive action against a growing threat on U.S. soil by Islamic State members.

The two lawmakers, a Democrat and Republican, offered pressure on a bipartisan basis on the Obama administration to turn back the Islamic State militants that have garnered large areas of land in Iraq and Syria.

Those fighters are now looking toward Western Europe or the U.S. for their next targets, said lawmakers.

Without giving any specifics on any possible threats or suggestions on how to confront them, lawmakers said the president needs to soon develop a strategy to crush the militants.

Michigan Republican Mike Rogers the head of the Intelligence Committee in the House said Obama’s foreign policy was in free fall.

Senator Dianne Feinstein the Democrat from California and the head of the Senate intelligence panel said the president was perhaps too cautious in combating the militant group.

Feinstein said the group has no intentions of stopping would come after the U.S. if they could and spill American blood.

Rogers said the threat could include any Americans who have been training with or trained with the militants.

He said hundreds of Americans have been trained by the Islamic State and can return at anytime to the U.S. with American passports.

The U.S. does not know of all Americans that have trained with the radical group or learned their ways of fighting, but Rogers said the U.S. intelligence was tracking the Americans they are aware of that have traveled to that region.

Those people said Rogers should face charges under the existing laws of prohibiting Americans from helping terrorists.

The House member said that an attack aimed at a Western nation was next on the group’s agenda.

Rogers said the Islamic State wants an attack that is in the West to continue the idea they are the world’s leading jihadist organization.

Other members of the House intelligence committee said they were skeptical that IS wanted to attack the United States.