Obama Says Islamic State will be Degraded and Destroyed 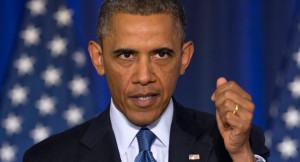 The United States said it planned to fight the militant Islamic State until it is not a force across the Middle East and will seek out justice for the murders of two American journalists, said President Barack Obama on Wednesday.

Obama said that destroying the terrorist group would take time due to the power vacuum inside Syria, the number of battle hardened fighters it has from al-Qaeda in the war in Iraq and the need to construct new coalitions including those with local Sunni communities.

On Tuesday a video was released by the Islamic State showing a U.S. journalist being beheaded, the second hostage from the U.S. killed in the past few weeks in retaliation for the air strikes by the U.S. in Iraq.

Obama told a press conference that the bottom line was clear. It was to destroy the Islamic State so they are no longer a threat to not only the country of Iraq but also the entire region and the U.S.

Obama added that whatever the murderers think they can achieve with the killing of innocent Americans they have failed already.

They failed due to people across the globe being repulsed by the acts of barbarism and the U.S. will not be intimidated, added Obama.

British and U.S. officials both looked at the video showing the same executioner with a British accent who had appeared in the video of August 19 in the killing of James Foley.

Air strikes were resumed by the U.S. in August in Iraq and Obama has said they already are proving to be effective.

On Tuesday, the White House announced that Obama would send three of his top officials – John Kerry the Secretary of State, Chuck Hagel the Defense Secretary and Lisa Monaco his counterterrorism adviser to the Middle East shortly to construct a stronger partnership in the region against the militants from the Islamic State.

It is thought that the militant group has a number of people held hostage including British new correspondents.