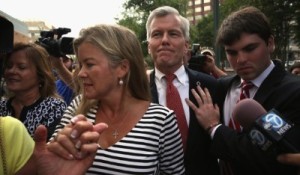 The charges came from the granting of favor to a wealthy businessman from Virginia in exchange for over $177,000 in loans, vacations and gifts. The two were acquitted of charges of bank fraud.

Reporters inside the court described the McDonnell’s and family members as hysterical and sobbing as the charges of guilty were read.

This was the jury’s third day of deliberating following a trial of five weeks.

McDonnell told the press upon leaving the court that his trust was still with the Lord. His attorney told reporters the verdict would be appealed.

This was a case of a huge fall from graces for the governor who had been at one time on the short list of possible running mates for Mitt Romney for the GOP presidential ticket in 2012.

During the trial of five weeks, the jurors were told about huge gifts that Jonnie Williams the CEO of Star Scientific gave the McDonnells. Those included a shopping spree in New York City worth $20,000 for the then Virginia first lady that included stores such as Oscar de la Renta, Bergdorf Goodman and Louis Vuitton.

Williams also spent thousands of dollars on vacations for the first couple and let them stay at his vacation home where he had his Ferrari so the couple could use it.

Jurors also saw a number of photos of the former governor driving the vehicle.

Williams purchased a Rolex watch for McDonnell. The ex-governor testified that his wife gave him the watch for Christmas, but said he was unaware Williams had purchased it.

McDonnell was the first governor of Virginia to be charged and now is the first to be convicted. Sentencing will be in January and the couple will face mandatory minimum sentence, but the maximum for each charge of corruption is 20 years.