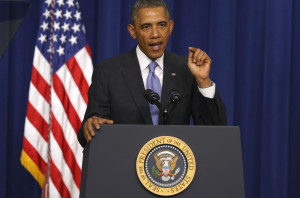 On Wednesday, the announcement by President Obama that drastically expands the military campaign by the U.S. against the Islamic State group of militants was met both with tentative relief as well as reservations from the Republicans.

Some Republicans feel the plan of Obama does not go far enough.

Lawmakers also from both parties expressed their disapproval that Obama did not ask for a congressional vote to give authorization of military force against the Islamic State.

In an address during primetime to Americans, Obama said he had authorized airstrikes by the U.S. in Syria as well as expanded ones inside Iraq, vowing to eliminate the terrorists wherever they are.

He also made another call to arm and train rebels in Syria to help with the fight.

Both Republicans and Democrats have been clamoring for weeks for the President to layout a clear plan of dealing with the Islamic Front and top GOP lawmakers like John Boehner the House Speaker said it was good that it finally had happened.

However, Boehner said he was concerned that Obama seemed to see the new action by the military as just an isolated campaign against terrorism, instead of an all out effort to eliminate the terror group.

Boehner said that although he is in support of the plan by Obama to work and train the security force of Iraq and the opposition force in Syria, he is worried that the effort would take too long and not be effective.

Boehner’s sentiments received echo from John McCain and Lindsey Graham two GOP senators who said the President had some key points right, but his plan was not sufficient to destroy the group completely, insisting it was necessary for additional steps.

There was concern as well from both Republicans and Democrats that Obama did not ask for the vote of Congress authorizing the force by the military against the group. A mission to equip and train rebels in Syria was authorized by Congress.

Chuck Hagel the Defense Secretary said in August that the terror group was beyond anything the U.S. military had seen prior.