Jim Webb Deciding Whether to Run in 2016 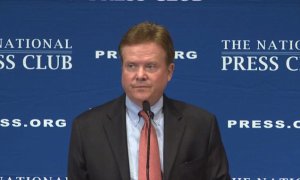 Jim Webb the former senator from Virginia said on Wednesday he was seriously considering a presidential bid in 2016. He said he would decide between now and February.

The Democrat said he was seriously considering it while he was at the National Press Club making an appearance.

Webb said he has had a great deal of discussion amongst people he respects and trusts about the country’s future and we will continue to do so for the next three to five months.

Webb, who is 68, said he was searching for a support base for a possible campaign. The decorated veteran of the Marine Corps, who was in the U.S. Senate between 2006 and 2012, was the Secretary of the Navy in the Ronald Reagan administration.

He has recently conducted an 800-mile three-day tour of Iowa and will visit New Hampshire during October.

Webb who made an appearance at the NPC spoke during his speech mainly on the economy and foreign policy.

He is viewed as an interesting challenger to Hillary Clinton the presumptive frontrunner of the Democrats if she decides to run.

In 2007, in the State of the Union rebuttal for the Democrats, Webb said the economy’s health should not be measured by Wall Street numbers, but with the living conditions that currently exist on Main Street.

Webb added that true fairness was not impossible, but those located at the top continue to separate from the other part of society.

Clinton is hosting a dinner at the Clinton Global Initiative and is seen by many progressives as too tied to Wall Street during a period when other Democrats such as Senator Elizabeth Warren have put the country’s economic inequality on the Democrat’s agenda.

Webb with regard to foreign policy is a strong opponent to interventionism by the U.S. having opposed the 2002 Iraq war and the Libya involvement by the U.S. during 2011.

While a senator, Webb opposed the proposal of Clinton to arm Syrian moderate rebels against the current regime.