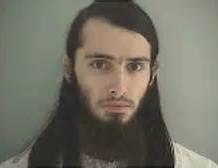 For months, Christopher Lee Cornell an Ohio man who is 20 years of age was on the FBI radar.

Agents arrested Cornell on Wednesday, before he could put into action his alleged bombing and shooting plot.

It was somewhat similar to the attack in Paris at the Charlie Hebdo offices, but at the U.S. Capitol, said the complaint filed by an agent with the FBI.

The alleged plan was to set off various pipe bombs to put panic into members of Congress and their employees, and then shoot them as they ran across his path and that of his accomplice.

The undercover agent said that Cornell was all set to go.

He made his preparations with his partner. He researched instructions on bomb making and by Wednesday, he purchased a pair of M-15 rifles and over 600 rounds of ammo.

However, the man who Cornell had believed was a partner was an informant with the FBI, a man who had been in trouble with law enforcement and was working with the FBI to help his own legal standing.

As soon as the FBI found out that Cornell had purchased the weapons, authorities moved on him before he could make the first move.

An official in law enforcement said that at no time were lawmakers ever in danger.

Close to lunchtime, over a dozen FBI agents with local police arrived at the residence were Cornell lived with his parents.

Cornell’s father was surprised to see the agents, as was his son. They took everyone in for questioning and hours later Cornell asked authorities were his son was, He did not get an answer.

Cornell allegedly wanted to carry out what is called a lone wolf attack to show his support of ISIS.

Cornell met twice with the FBI informant, once in October and once in November.

His father doubts Cornell wanted to carry out a plan and said he did not even have money to purchase the guns. He believes the FBI pushed him into it.