Church Community is Outraged by Remarks by Obama over Crusades 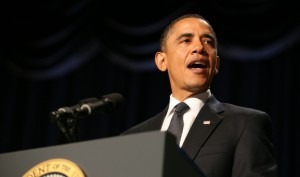 President Obama made an analogy about the Crusades as an attempt to show how all religions have their extremists that make the larger number look bad. However, that does not mean Islam itself is not peaceful.

The recent comments by the president about the terrible acts committed by Christians during the course of history and his comments about IS led to a big backlash from the church community in the U.S.

Obama made those comments on Thursday to listeners at Washington’s National Prayer Breakfast as the president said the amount a religion should receive blame for extremism seen by the Islamic State. led to a big backlash from the church community i umber look bad.  an extension inclu

Although the president meant to illustrate that every religion has its individuals who go too far, the comments upset many Americans who felt the comparison was inflammatory and did not make sense.

Obama started by calling Islamic State a vicious death cult, and then mentioned the Crusades and Inquisition and how the people did terrible things under the name of Christ.

He pointed out as well the Jim Crow laws used in the South and the treatment of blacks in the name of Christ.

He tried to make the point that essentially Islam at its core is not anymore violent necessarily than Christianity, and that the extremists in each can make the whole look bad.

However, the backlash the president received might indicate that many see the fight against IS as a religious war and the terrorist group has arrived at a basic Muslim interpretation of the Koran.

Others have accused Obama of insensitivity to those suffering violence by IS. It fueled additional speculation by Obama’s far right opposition that he is not a Christian but secretly Muslim.

Jim Gilmore the former Governor of Virginia and a Republican said the remarks made by Obama offended every Christian in the U.S. and showed that Obama does not believe in the U.S. or the values everyone shares.