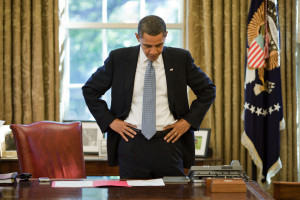 President Obama and his White House administration circulated its proposal on Tuesday to authorize the Pentagon to fight the terrorist group Islamic State without a role that includes enduring offensive combat, an ambiguous phrase that is designed to make lawmakers happy that have different views over the need to have ground operations by the U.S.

Senator Bob Menendez a Democrat from New Jersey described the proposal by saying that President Obama is to seek authorization to use force which would end after a period of three years.

The proposal would end approval of operations within Iraq that were passed in during 2002 by Congress.

Menendez spoke following a private meeting he participated in with Democratic senators with top aides from the White House, on the night before the formal request for legislation from President Obama.

Josh Earnest the press secretary at the White House said he hoped there would not be significant delay by Congress in acting upon the request.

The terrorist group controls large swathes of land in Iraq as well as Syria. The most immediate concern is a struggle in Congress as lawmakers search from compromise that would satisfy the Democrats who are against using ground forces and at least leave that possibility open.

Senator John McCain a Republican from Arizona is influential and said it seemed bizarre for President Obama to ask lawmakers to limit this power as the commander in chief.

Senator Barbara Mikulski a ranking Democrat from Maryland said she had questions about the proposal of the president.

Nancy Pelosi, the Democratic Leader of the House, said she was not for putting boots on the ground, which was in reference to the use of combat forces by the U.S.

Menendez said that it was not clear yet if the new proposal cancels an authorization from 2001 for using force that the Congress approved after the 9/11 terrorist attacks.

Republicans are in control of both chambers of Congress but the president generally looks for bipartisan support for measures of this sort.

Public sentiment shows general support of the airstrikes by the U.S. for several months, but less support for the use of U.S. ground troops following the wars in Iraq and Afghanistan.