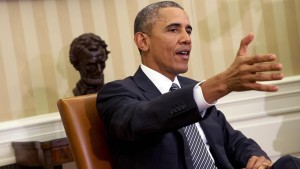 The White House administration put its new program of deportation relief on hold this week just a day before it was to launch, complying with the order by a federal judge that roiled the immigrant communities across the country and hardened a stalemate that was already tense on Capitol Hill.

President Obama promised to appeal and predicted he would prevail, but for the tens of thousands of immigrants waiting to begin applying on Wednesday for deportation stays and work permits under his new directives, their plans were abruptly cancelled, at least for the time being.

Talking with reporters on Tuesday from the Oval Office, Obama said that he was not in agreement with the judge’s ruling that his administration exceeded its authority. However, he did say for now that he must abide by that ruling.

On Capitol Hill, only 10 days remained before the Department of Homeland Security lost its funding, but the ruling by the judge made a compromise over that look even more difficult than before.

Republicans have blocked funding of the agency unless the Democrats agree they will cancel the immigration orders of Obama and seized upon the judge’s ruling as a validation for their demands.

Senate Democrats, who have blocked a bill passed by the House funding DHS but undoing the actions made by Obama on immigration, have not budged from their opinion.

The $40 billion DHS budget ends on February 27 and with recess this week for Congress, lawmakers will have just a couple of days to come to an agreement once Congress is back in session next week.

There is a possibility of a short-term extension but John Boehner the House Speaker said this past weekend that the House did its job and would let the agency shutdown if there was not action from the Senate.

Many immigrants across the country who are living illegally have cheered the executive directors of Obama in face of the inaction by Congress.