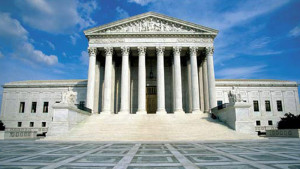 The U.S. Supreme Court heard historic arguments starting Tuesday on the right of lesbian and gay couples to marry.

Justice Anthony Kennedy, a conservative, is seen as having a pivotal vote on the issue. He said marriage has been understood as being one male and one female for a very long time. He added that same-sex marriage had only been debated in an earnest way for 10 years and he wondered whether scholars and public need additional time.

It is hard for the court to come out and say, “We know better,” said Kennedy to one of the lawyers representing same-sex marriage.

The arguments were the first public indication of how the justices stand with respect to the dispute of whether states have the right to define marriage as only a union of man and woman or if the Constitution gives lesbian and gay couples the right to be married.

The session was stopped for close to 30 minutes by one protester who yelled loudly. Security finally removed the man. Justice Antonin Scalia indicated that the issue was not whether same-sex marriage should exist, but who is able to decide the point. He said he was concerned about the high court imposing a requirement on states that is unpalatable for many due to religious reasons.

Justice Stephen Breyer questioned if the country needs additional time to see whether or not gay marriage was harmful to the society.

A lawyer representing same-sex marriage responded that an attitude of wait and see has not ever been considered a justification of discriminating under the U.S. Constitution.

The high court was hearing the issue under extended arguments that was scheduled for 2.5 hours. The court was also exploring whether or not states that do not allow same-sex marriage must recognize nonetheless such unions that are from elsewhere. At the present time, couples that are same-sex can be married in 36 U.S. States as well as the District of Columbia.