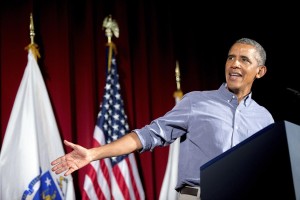 U.S. President Barack Obama is signing an executive order in Boston on Monday that requires government contractors to offer paid sick leave of seven days per year to their employees said the White House.

One senior adviser told reporters on Sunday that the U.S. was the only country in the developed world that did not have a policy for paid leave and that this executive order would help close to 300,000 people who are working on contracts for the governments.

The statement released by the White House said that the president saw a pressing for the policies to support the working family.

Beginning in 2017, workers on government contracts will start to earn a minimum of one hour of sick leave that is paid for every 30 hours they work. Contractors can offer amounts that are more generous but that is the minimum.

The president’s executive order comes after a number of different measures by the Obama administration to expand access to paid leave.

This past January, Obama issued another Presidential Memorandum that directed the government to advance as much as six weeks of sick leave paid for the birth or the adoption of a child or for other eligible uses of sick leave.

Obama called upon Congress to pass new legislation giving employees of the government six more weeks of parental leave paid. Thomas Perez the Labor Secretary said he could not give what the cost would be of implementing the paid leave of seven days for contractors.

Obama will use the Boston trip to renew a call for the U.S. Congress to pass the pending Healthy Families Act, which would require businesses with more than 15 employees to offer as many as seven sick days that are paid annually.