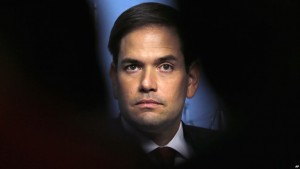 On Wednesday, Marco Rubio the Republican presidential candidate tried to dismiss attacks on his own personal finances, calling them discredited as his opponents on both his right and left are casting new doubts over how he used a credit card from the Republican Party.

Rubio in New Hampshire campaigning was faced with new fresh questions over the spending on the credit card after a report in the Tampa Bay Times had highlighted the senator’s failure to make his statement of his credit card public from when he served in the state legislature in Florida.

Rubio has been dogged by different reports that he charged expenditures that were personal to a credit card with American Express he had received from the Florida Republican Party while he served as the house speaker between 2006 and 2008.

Rubio maintained it was his honest mistake and he reimbursed his party with over $16,000 to cover his personal charges that included a family vacation for $10,000 and movie ticket for $10.50 along with a minivan repair bill.

The newspaper in Florida said some of Rubio’s statements for his credit card from the period of two-years remained private.

Rubio addressed the financial issues during his first memoir, known as An American Son that he released during 2012. At the time, he was part of a shortlist of vice presidential candidates for Mitt Romney the Republican nominee.

He wrote that his lack of skills in bookkeeping came back to haunt him, referring to the efforts by his opponent Charlie Crist in the Senate race of 2010 to make a big issue of the expenses.

Following his campaign event on Wednesday in New Hampshire Rubio was asked why he characterized his person finances as attacks by Democrats when he did admit to accounting errors in his memoir.

The senator announced that he would be releasing his records from the credit cards soon and likely within the next few weeks.

It remains unclear what the statements might contain, a campaign spokesperson from Rubio said the campaign had planned all along to make those records public.

Rubio said the newspaper report was not accurate adding each expense on that card had been detailed in the official filings of the party.