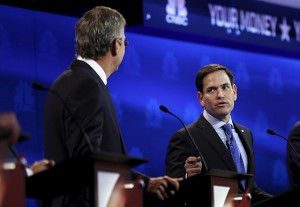 Another Jeb Bush vs. Marco Rubio battle will set the stage in tonight’s debate of the GOP Presidential candidates.

The fourth debate will pick up where the third one left off with former Florida Governor Bush needing to have a very strong showing and with his Super PAC picking a big fight with Senator Marco Rubio.

The Super PAC Right to Rise filmed a video that has cast Rubio as ultimately unelectable due to a hard-line stand versus abortion.

That Super PAC, which has raised over $100 million, has asked New Hampshire voters what they feel about Rubio’s skipping of important Senate votes and the chief strategist of the group boasted of the willingness to spend up to $20 million to hurt Rubio’s reputation and stop his sudden accent up the polls, says three people familiar the Super PAC.

The Rubio campaign, in response released a new ad online that is loaded with instances where Bush praised Rubio, saying at one time that he was a huge Rubio fan.

People are wondering why the Super PAC would leak this type of story especially prior to the debate on Tuesday night.

The pressure is much more on Bush tonight than Rubio. Bush is floundering in the polls and needs more out of this debate than does Rubio, who has seen his popularity continue to rise.

Another subplot in the Tuesday GOP debate is whether Donald Trump will go after Dr. Ben Carson. Trump previewed what he would do on Sunday’s Meet the Press by saying he felt badly for Ben as he has gotten to like his fellow candidate  and it will be tough, referring to Carson’s book and the personal problems the doctor described in the book.

Carly Fiorina’s Super PAC has released a video that defends her statement made on Meet the Press that a tax plan is not needed or any other type of plan. She added that anyone can write a plan, adding that how often are detailed plans put out by politicians and how often are they enacted, almost never.

SAP SE Given Average Rating of “Buy” by Analysts