President Obama to Appeal Ruling on Immigration to Supreme Court 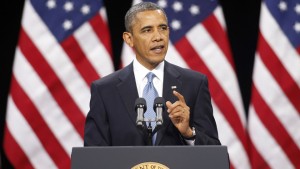 President Barack Obama will ask the U.S. Supreme Court to clear the way for the overhaul of far reaching proportions he made of the immigration system of the country.

This will set up a big battle in the highest court in the country over whether more than 5 million undocumented immigrants will be able to legally live and work in the U.S.

One year after Obama asserted his power using executive privilege to provide protection from further deportation and work permits for the immigrants, his plan remains under heavy assault from conservatives who tied it up in court.

On Monday, a federal court of appeals said Obama exceeded his authority.

If the U.S. Supreme Court agrees with hearing the case during Obama’s current term, a ruling could possibly come by sometime next summer, only days prior to the two political parties holding their conventions to nominate their candidates for president for the November 2016 election.

A decision in June could set up a big debate on this issued that is critical to both sides.

A decision from the court would also leave a long term impact on the legacy of the president, and shape how generations in the future assess Obama’s ability to confront what he called on of the biggest issues of civil rights in this generation.

It would also mark another test of Obama’s agenda after ruling by the Supreme Court on healthcare, women’s rights, the environment and his exercise of presidential power.

Experts in legal cases said no matter how the Supreme Court rules, the decision could expand or could trim executive authority of presidents, in the future on issues far beyond just immigration policy.

One analyst said a ruling that was against Obama would scale back generations worth of presidential power.

That could put the U.S. down a road toward much increased judicial determination of policy questions.