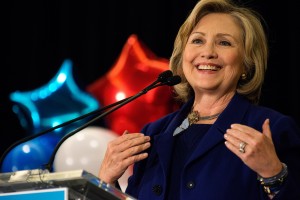 Hillary Clinton, the former secretary of state, narrowly defeated Senator Bernie Sanders of Vermont in the Nevada Democratic caucuses on Saturday. With votes from 92 percent of caucus precincts counted, Mrs. Clinton had won 52.6 percent, while Mr. Sanders had drawn 47.3 percent. Mrs. Clinton gave her victory speech Saturday afternoon in a ballroom at Caesars Palace. During the speech, she praised “the thousands of men and women with kids to raise, bills to pay and dreams that won’t die.”

Mrs. Clinton’s team is sure to be relieved with the win after her crushing defeat in the New Hampshire primary. Mrs. Clinton considered Nevada a safer state for her campaign than the mostly white electorates of New Hampshire and Iowa. Mr. Sanders performed well in Iowa and New Hampshire, but is now under pressure to demonstrate that he can attract a broad cross-section of Democrats and remain competitive with Mrs. Clinton.

In Nevada, Mrs. Clinton was buoyed by the support of minority voters and enthusiastic casino workers. Voters in many predominantly Hispanic and black neighborhoods backed Mrs. Clinton, whose message of solidarity with minority voters seemed to resonate with them. Mr. Sanders campaigned hard in Nevada in hopes that a surge of Latino and black voters would respond to his message. However, early organizing in the state and a last-minute on-the-ground push by Mrs. Clinton’s campaign and its supporters paid off.

Mrs. Clinton is hoping that this win proves to the Democratic Party that she can assemble a broad coalition to carry her to the general election. In the view of several political analysts, Mrs. Clinton’s victory in Nevada increases the likelihood of her winning the South Carolina primary on Saturday, as well as many of the Super Tuesday contests. However, the win is not a total victory for Mrs. Clinton.

The turnout for the Nevada caucuses was relatively modest compared to what it could be in the general election. Also she had been far ahead in the polls until recently, when Mr. Sanders began closing the gap rapidly. If Mr. Sanders had prevailed in Nevada, the Clinton campaign would have suffered a serious setback.