Voters Across Five States Head to the Polls Tuesday 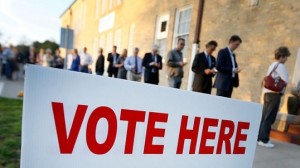 Super Tuesday II has arrived. Voters in five U.S. states will be casting their votes on Tuesday in what could decide whether Donald Trump the real estate mogul will all but wrap up the nomination for the Republicans with wins in Florida and Ohio or if Senator Marco Rubio and Governor John Kasich can live to fight again.

With North Carolina, Missouri and Illinois also having primaries for both the Democrats and Republicans, Tuesday had more delegates available than almost every other day on the primary calendar.

Polls have shown that Trump is beating Rubio in Florida by double digits, but Ohio is expected to have a much closer race. Polls in the Buckeye State show Trump neck and neck with Kasich while the sitting Ohio governor is holding a slight edge in the polling average.

In an effort at the last minute to shore support in the state of Ohio, Trump postponed an event Monday evening in Miami to hold a rally near Youngstown.

Trump enters Tuesday’s primaries in one of the biggest controversies to date in his campaign. The front runner of the GOP has encouraged his supporters to physically confront any protesters at the events he holds and is face harsh criticism for doing so after fights broke out in Chicago last week at a rally.

During a Monday night event in Tampa, Trump intermittently was interrupted by protesters of which some were removed with force. Trump said he did not want to ruin the life of somebody, but asked if someone like that is prosecuted?

On Monday, Kasich was campaigning with Mitt Romney the Republican nominee from 2012 who is a fierce critic of billionaire Trump an offered assistance to all of the rivals of the front runner.

While Romney did not come out and endorse Kasich, he said he would do anything that is needed to help all the rivals of Trump.

Despite Rubio gaining the support of numerous elected officials in the Republican Party it appears he slipped even more in public polls on Monday.