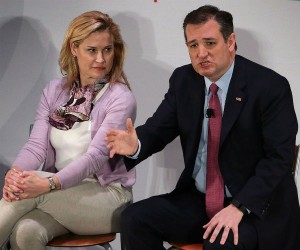 On Thursday, Ted Cruz lashed out at the personal attack of Donald Trump toward Heidi Cruz his wife calling his GOP opponents in the Republican presidential race a coward.

I rarely get angry, but when you mess with Heidi or my kids that will make me angry every time, said Cruz in Wisconsin. Trump is a sniveling coward and leave Heidi alone, added Cruz.

The warning from the Texas senator came just hours after Trump increased his attacks against Cruz’s wife Heidi, which started with a tweet on Tuesday by Trump that threatened to spill all the beans regarding her.

The real estate mogul took issue with an ad by Super PAC that is anti-Trump that features a photo that was risqué of Trump’s current wife Melania Trump the former model, while urging people from Utah to support Cruz.

Cruz responded quickly with a tweet on Tuesday telling his opponent that the picture of Trump’s wife was not from the Cruz campaign and that if Trump tried to attack Heidi he was more of a coward than Cruz had thought.

Cruz has disavowed the Wednesday ad, calling it inappropriate and insisting that his political campaign did not have anything to do with it being released.

The ante was upped later by Trump sharing a photo on Twitter that showed Mrs. Trump next to a photo of Heidi Cruz that was unflattering to Mrs. Cruz.

Again, Cruz issued a quick response telling Trump that real men do not attack women. Your wife he added was lovely and Heidi is the love of his life.

Thursday afternoon the senator elaborated before a stop on his campaign suggesting that Trump is scared of women who are strong like his wife Heidi.

Cruz went on to say that, real men do not try bullying women as it is not an action of being strong, but rather weakness. It is an action he called fear.