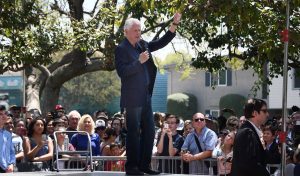 Former U.S. President Bill Clinton was trying to explain the reason his wife is currently having trouble being liked, saying it is the MO of the Republicans to cast Hillary as the villain, though he reminded a Santa Monica, California audience that things were not always that way.

Clinton said he has known Hillary 45 years and cannot understand the wicked witch of the west the Republicans are trying to portrait her as.

He added that all the Republicans at one time were slobbering over her until she was no longer in the state department. Clinton said they all though his wife was wonderful,

The former U.S. president praised the willingness of his wife to work with Republicans as one reason she is deserving of support from voters.

While a New York senator Hillary was able to get some endorsements from New York Republicans, added the former president.

He said one of the Republicans said that they elected her to the senate and she actually did something while in office.

He reminded Friday’s audience that while his wife was secretary of state, Republicans were lauding the efforts she made in helping to push for Iran sanctions.

He said they loved the deals she made with Russia as well as when she flew to Cairo from Asia overnight to help with the negotiating of a ceasefire and help Israel.

Clinton gave advice about today’s politics saying he finds in any contest there should be an assumption that your opponents are smart, because if they are not you will win anyway.

Clinton spoke to the audience about how slinging mud at candidates will eventually take its toll.

He told the audience that if he took one person and put them in front of the rest and said a hundred things bad about that person, the audience’s opinion of that person would go down even if the things said were not true.

However, Clinton suggests to fans of Hillary that there was still hope because at some point the voters will think about their families and pocketbooks and issues that matter the most.

Clinton added that when he ran in 1992 he was in third place until after the Democratic convention when he took over first place and went on to win the general election.

He says his wife is in a much better position now against Trump, and then he was at this same time in 2003.