Donald Trump Could Find Himself in Deep Trouble 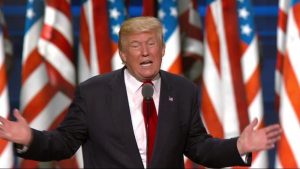 Things seem to be changing in the Republican Party. Donald Trump, once considered the unsinkable candidate who was immune to the different political consequences whilst coming out on top in the race for the party’s presidential nomination, now has a campaign that is ailing and suffering from self-imposed toxicity.

News media around the country are obsessed with the fallout in Trump’s team and the dissension within the Republican Party.

When Trump has a rally or starts tweeting on Twitter, close to half the country holds its collective breath, waiting on him to make an insult, growl at someone or even knock a puppy form the podium.

That is because now the contest is different, the context is different and Trump is being caught up in the confluence of negative stories.

The contest is no longer just about one party. It is now at the national level, the long months of infighting amongst the GOP, debates, caucuses and primaries are over.

The audience is now both bigger in size and in attentiveness. The campaign running up to the fall election is broader, luring in more than twice the number of votes and a much more diverse mix of the U.S. population.

When the audience’s demand begins to change, the manner of how the candidates act usually does as well.

Those not making that pivot to the overall population can end up dealing with the dreaded consequences such as George McGovern back in 1972 and with Walter Mondale during 1984.

There is also the change in media context. Following the conventions, focus begins shifting to a two-person choice.

The concentration on each candidate becomes more focused. Trump during the primaries seemed able to say almost anything without reproach with any damage lost amidst the mounting votes he was receiving.

He came close in the end to winning half the vote of the Republicans.

The controversy he generated nearly everywhere he went seemed to fall away, until now.

Suddenly, Trump’s freewheeling personality that was his success had become offenses and miscues. It seems like someone suddenly located a switch and instantly changed the Trump phenomenon overnight from positive to very negative.

The biggest primary foe of Trump, Senator Ted Cruz warned the media was holding bad stories about his opponent that would be unloaded after he was the nominee.

After a few days of a bump in the polls following the GOP convention, the last five days has seen his lead vanish and turn into a deficit of double digits.