Plane With Governor Pence Aboard Skids Off New York Runway 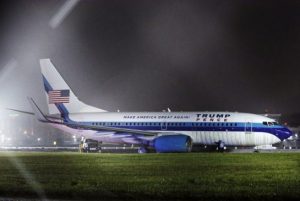 A plane that was carrying GOP vice presidential nominee Mike Pence slid off a La Guardia Airport runway on Thursday night after landing.

Authorities said that none of the 48 people who were aboard at the time were injured. The incident happened during a rainy evening on Thursday in New York City.

A press pool sitting in the rear of the plane, a Boeing 737-700, that was painted with the Donald Trump campaign logo, said they felt the plane was fishtailing upon touchdown and slid off into grass along the side before coming to an abrupt halt.

Once the aircraft was at a full stop, the governor of Indiana walked to the rear of the aircraft to check the press corps. As those aboard were deplaning, Pence was seen talking with first team emergence responders.

A Pence spokesperson said the Republican VP nominee was going to his hotel canceling an appearance scheduled nearby at a fundraiser in Trump Tower. He called the event rather that attend.

A Donald Trump spokesperson said the billionaire spoke to Pence after the airplane incident saying that Trump was very happy that everyone aboard the plane was ok.

When the incident took place, Trump had been in Ohio. He later addressed the Ohio rally and referenced his call to Pence.

Pence on Friday was scheduled to campaign in North Carolina after visiting Pennsylvania and his campaign said the schedule was going ahead as planned.

After the incident, Pence tweeted that he was thankful everyone on the plane was safe and grateful for the first line responders.

Rescue crews responded quickly to the crash, where there had been noticeable damage to the airport’s runway, although a spokesperson for the Trump campaign said no structural damage had been done to the plane.

Law enforcement sources said that the runway damage was because of safety material located where the runway ends that was designed to break apart upon impact.

The governor’s New York return trip initially had been delayed because of inclement weather. The plane he was flying in was grounded in Iowa earlier the same day.

Pence used the delay in the flight to throw a football around with his staff members and threw a couple of soft passes to members of the press.

A former Transportation Department inspector general said that the inclement weather had likely prevented Pence’s aircraft from obtaining the necessary traction it needed to stop.