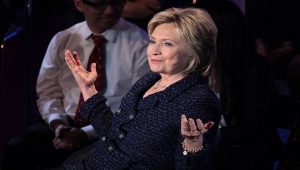 The Justice Department and FBI are reported to have been at odds over how to investigate Hillary Clinton the presidential nominee from the Democratic Party as authorities announced they were taking another look at the former secretary of state’s emails.

An article in the Wall Street Journal that cited people who were familiar with this situation, said on Sunday that law enforcement officials had voiced skepticism a number of times of the strength of the investigation by the bureau into Bill and Hillary Clinton’s Clinton Foundation; attempted to condense the bureau’s effort it put in the probe; and told agents to limit their pursuit in the case.

Initially the FBI started their own investigation in the foundation to determine if financial crimes or any influence peddling had occurred in relation to the charity.

The WSJ article said some investigators became frustrated with this case and looked at some of the FBI leaders as being uninterested.

Others involved with the case disagreed and said that the second in charge at the FBI Andrew McCabe was fighting for control with the Justice Department and the probing of the foundation by the FBI.

McCabe began overseeing the case into the private email server of Clinton earlier in 2016. However, it seemed McCabe was caught in a difficult situation after it was learned that last week his wife, a doctor, had received over $465,000 in campaign funds from a PAC supporting Terry McAuliffe the Governor of Virginia and a longtime ally of Clinton and a former members of the board at the foundation.

She was running in November for an open Senate seat in the state, but lost.

Officials at the FBI insist McCabe played no role in the email investigation of Clinton until he had been promoted and by that time, the campaign of his wife had ended.

Those who are close to the email probe of Clinton said that by the time that McCabe even had joined the email investigation other probes related to Clinton had already been underway as part of an internal heated debate.

For many months, the field offices of the FBI in Los Angeles, New York, Little Rock and Washington were gathering information about the foundation and other potential cases of public corruption and one was linked to McAuliffe.