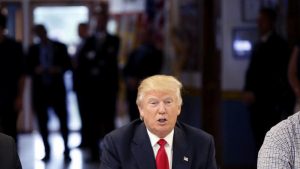 Amongst the small number of newspapers in the U.S. that have come out publicly embracing the presidential campaign of Donald Trump, there is one, that stands out amongst the rest.

The Crusader is one of the Ku Klux Klan’s most prominent papers. Under a banner that used Trump’s presidential slogan of “Make America Great Again” the complete front page of the current issue is nothing more than a lengthy defense of Trump’s political message and by many called a de facto endorsement.

The slogan has been used repeatedly by Trump during his campaign, said on pastor who wrote for the Crusader. The pastor said everyone in the U.S. and the world will soon know if it can happen, and America can be great again.

The article said that while Trump promises to make American great again everyone must ask themselves what is it that made America great when it started. He said the answer to that was simple, America at one time was great not because of the accomplishments of its forefathers but because of who they were.

The article continues by saying that America was founded as a White Christian Republic and as that it became great.

The campaign for Trump was quick to criticize the paper’s article and added that Trump denounces hate in all forms.

The campaign continued by saying the newspaper was repulsive and its views did not represent Trump or the millions of Americans uniting behind him.

Editors of the paper said when contacted that they were not giving Trump an official endorsement but it showed the enthusiastic support the publication has for the billionaire’s candidacy.

They added that they liked the views Trump had about closing the border to undocumented aliens, that they called nationalist views.

They said that there was no endorsement on their part for Trump since there are issues they do not agree with, but did not go into detail about those.

The newspaper, which is just 12 pages in length and is published quarterly, says it is the white Christian political voice and has on its front page its white supremacist symbol.

The most recent issue also included editorial about Jewish links to world terrorism, black on white crimes and a male who says he is the illegitimate son of Bill Clinton.

Many white nationalists have been attracted to Trump’s campaign since its inception.