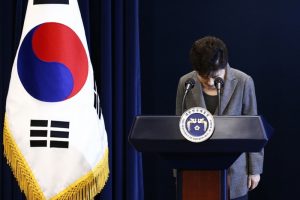 On Friday, lawmakers in South Korea impeached the President Park Geun-hye marking a swift and stunning fall from grace for the first female leader of the country amidst protests, which attracted millions to fill the streets to unite against her.

Following the vote, officials in parliament delivered formal documents by hand to the presidential house that stripped the president of her powers and allowed the No. 2 official in the country Prime Minister Hwang Kyo-ahn, to take the reins of leadership until a ruling by the Constitutional Court on whether Park will be permanently removed from office.

That decision can take as long as six months to be taken, per South Korea law.

Following the vote, Park spoke prior to a closed door Cabinet meeting and said she was sorry that the people of South Korean had to experience the turmoil due to her negligence and a lack of virtue during a time when our economy and security both were facing difficulties.

Hwang said separately that he wanted the opposition and ruling political parties along with parliament to gain strength and wisdom in order for them to return more stability to the entire country and to the people as quickly as possible.

Park was called at one time the Queen of Elections due to her ability of pulling off wins for her political party. Park recently has been surrounded at the Blue House by millions of people in South Korea, who have been in the streets protesting.

The people are livid over what federal prosecutors said was collusion by the president with a friend of many years to exhort money from businesses and give the confidante extreme sway over decisions made by the government.

Protest organizers said close to 10,000 people had gathered outside the National Assembly demanding lawmakers pass the motion for impeachment.

Some spend the previous night in the streets following long travels from places outside the capital.

Fights broke out between angry farmers, who are anti-Park, some of whom drove their tractors from their farms to the National Assembly, and the police.

When the vote for impeachment took place, a number of them raised their hands and jumped about both laughing and cheering.

The passing of power has prompted the country’s prime minister to order the defense minister for South Korea to place the military at high alert to brace for any possible provocation by their neighbor North Korea.