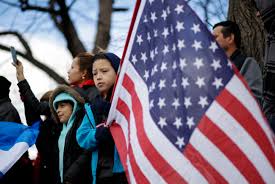 To advocates of immigration, the White House administration laid out a plan of mass deportations Tuesday when it released a detailed outline of how it is going to enforcement immigration laws in the U.S.

The National Immigration Law Center (NILC) executive director Marielena Hincapie said the center is preparing for increased raids and more detentions of members of the community.

The Trump administration has rejected that form of describing its memos that the Department of Homeland Security issued.

The memos are only to be guidance to border and immigration officers and agents on how to implement the executive orders on immigration that new President Donald Trump put into force shortly after he was inaugurated.

When Sean Spicer the Press Secretary at the White House, was asked if the memos amount to mass deportation he answered, “No.”

He added that the message from both White House and the DHS was that people who are in the U.S. and who pose a threat to the safety of the public or committed crimes will be those that are deported first.

He added that the administration will be making sure in an aggressive manner they go first. Spicer said over 1 million people fit into that category.

The memos were a complete departure from the system that was put in place by President Barack Obama that left a number of immigrants feeling secure before the election of Trump.

There was an exception. The new administration left the Deferred Action for Childhood Arrivals (DACA) in place, which is a program that shields close to 730,000 immigrants from being deported and allows them to study or work in the U.S.

That program was authorized by Obama in 2012 for those who were brought by parents or family into the U.S. at an early age.

Advocates quickly said that sections of the two memos must go through the process of federal regulation and could not be implemented at once.

However, the NILC executive director said the White House is saying now that anyone can be stopped and detained so any agent with ICE can decide who they will go after without any restraints on doing so.

The memos also promoted plans for the government to deputize local authorities in law enforcement to enforce their immigration laws, which could mean that being stopped for a traffic violation would result in being asked to give identification.