Hackers Accessed Private Email of Mike Pence While He Was Governor 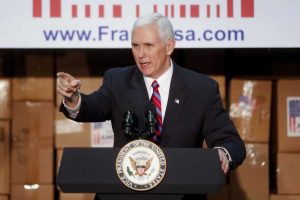 Vice President Mike Pence, while the Indiana Governor, used a private email account, which later was compromised his office confirmed on Thursday.

The account’s existence was reported after an Indianapolis newspaper obtained copies of emails sent by Pence through a request of the Freedom of Information act.

The paper wrote that Pence had used the hacked account to conduct Indiana government business, including correspondence that contained potentially sensitive information.

In one email exchange, Pence discussed with his chief of staff and top homeland security official, who conveyed updates about FBI arrests that were terror related in Indiana.

However, that information in the emails was reported at the time by the media.

Through a prepared statement, the press secretary for Pence Marc Lotter announced that Pence’s use of a personal as well as government email was in line with previous Indiana governors.

When Pence concluded his term as Governor of Indiana, he directed an outside counsel to review his communication as a way to ensure that emails that were state related were transferred and archived properly in accordance with law, which has been done by outside counsel and is continuing to do so.

Pence had been using an account on AOL since the 1990s and used it during his entire term as Indiana governor until he resigned in 2016 and the email was subsequently hacked.

Hackers were able to leverage his contacts and launched a phishing attack sending an email that claimed that Pence and his wife had been stranded while visiting the Philippines and they needed financial assistance.

After the hack, the account was shut down and former governor Pence started to use another AOL account, said one of this aides.

Using a private email account is not against the law in Indiana. However, state accounts cannot be used by public officials for political work.

Experts in online security noted that some of the emails of Pence were confidential and sufficiently sensitive that they were not allowed to be transferred to the requests from public records.

According to one aide, more security measures had to be taken to protect the accounts of Pence after he was picked to joint Donald Trump’s ticket as the vice presidential nominee.

Pence often criticized Hillary Clinton for her use of a private server for email while she was Secretary of State under President Obama.

Bitcoin Price Up 0.4% This Week